Exactly a month ago I wrote about the bogus employment numbers claimed for the Chicago area.  I claimed that there were no actual jobs “created” and that the only reason the employment rate went down was because people simply left the job market.

Didn’t have this at the time… but my theory has real support.

Wanna see a chart of the Labor Force Participation Rate? 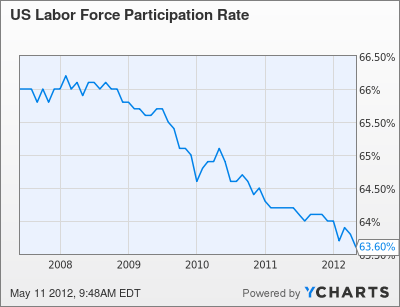 Pretty wild?  That fall off represents millions and millions of people who are simply no longer working, looking for work, claiming unemployment benefits, or are new grads who can’t find work.

It’s no wonder that more and more people are eating at McDonald’s.